She’s after payback, but there’s no way she’s going to get it. 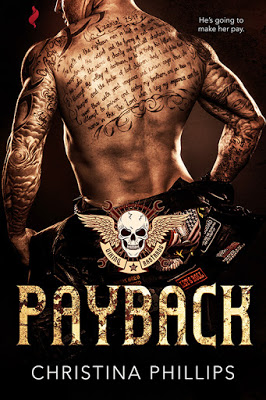 I don’t fuck girls who work for me, but as soon as Amelia turns those big green eyes on me I know she’s trouble. I can’t keep my hands off her, and the almost-but-not-quite-sex we share in the kitchen is the hottest thing I’ve ever had. Except she calls it quits, before we’ve even started.

Instead of moving on, she’s all I can think about and that’s bad news. I’m breaking all my rules for her, and don’t even care.

Until I find out who she is and what she really wants. She’s after payback, but there’s no way she’s going to get it. No way in hell…

Review by Victoria:
When your whole life has revolved around getting revenge, the moment it comes to be can seem unreal. This is where we meet Amelia, a young woman determined to right the wrongs done to her family by the biker gang Viking Bastards. Every decision she’s made in life has brought her to the opportunity she’s been waiting for. She finally has an in to take them down from the inside and inflict maximum payback. But her first day at the job that will bring her everything she needs to pay them back, she meets Gage. Gage just happens to be the president of Viking Bastards and the one person she wants to cause the most damage to, that is until she meets him and panties melt to the floor.
What do you do when you can’t resist the one man you want to take down? Amelia takes us along for this wild ride from revenge to lust and everything in between.
This was an easy read that I loved. Amelia shares her inner thoughts and plans while you also get the open thoughts of Gage to complete the whole package. Watching these two tango around each and the passion they share pulls you completely in and makes for a story that captivates you as you read. See where payback will get you, especially when your heart is involved. 4 Stars
Get HOOKED on the Viking Bastards MC 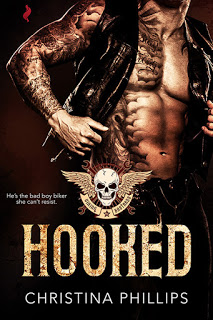 Christina is addicted to good coffee, expensive chocolate and bad boy heroes. She writes on the sizzling side of naughty, and loves bringing her tough biker heroes to
their knees (her heroines enjoy this, too ☺).
Christina is also owned by three gorgeous cats who are convinced the universe revolves around their needs. They are not wrong.

One thought on “PAYBACK by Christina Phillips”