Blurb:
Gabrielle Thornton
I made a mistake.
I allowed myself to be born. I allowed myself access into a life that wasn’t mine, and for that, I had willingly submitted my body and soul to a man whose sadistic pleasures knew no bound, a man who relished in my pain as much as he craved my flesh.
A monster I would do anything to escape.
But what if I could make it stop? What if the cost of freedom was a single night in a stranger’s arms? What if one final sin was all I needed to commit to find peace?
Kieran Kincaid
I had always known of the sickness that lived inside my father, the demons who controlled the man. His death was a blessing to every innocent he’d destroyed with his dark hunger.
Yet, despite his demise becoming my curse, a shackle trapping me in his twisted secrets, it lured me to it, too. It promised me the thing I coveted above all else. It seduced me deeper into the world I wish I knew nothing of, but there was no turning back, not even if by accepting, by taking what didn’t belong to me made me a monster like him.
Gabby would finally be mine.

Review by Paula:
Gabrielle lives her life scared, abused and threatened daily but it’s her secret from the world. Kieran has wanted Gabrielle for over 3 years but thought she never felt that way. Gabrielle decides to put herself in a auction for money that’s the day her life changes.. I love all the different points of view we saw the sides to all the different characters even the evil ones so it made you know exactly what was going on in each ones head. Suspenseful and sexy story that has you on pins and needles wanting to know what’s gonna happen next. 4 Stars 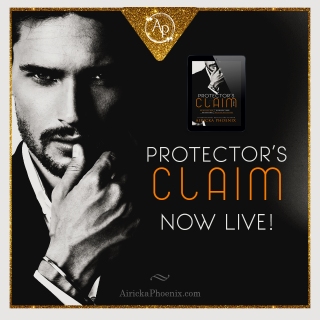 Airicka Phoenix is a multi-genre author of novels starring strong female leads and sexy alpha heroes. She started her journey after never finding the type of books she wanted to read. Her love of tortured souls and forbidden romance carried her into writing her own hard-earned happiness. Currently, she lives on the outskirts of Toronto with her babies and can be found hard at work on her next project.