Sarah
I was just six months pregnant when I lost the man I was going to marry. Mouse was caught in the crosshairs of a war between the Kings of Korruption MC and a rival club, leaving me to raise our daughter alone. Brokenhearted, angry, and terrified, I struggle through life, determined to raise my daughter the best way I know how.
Since the day Mouse was killed, Bosco has been tasked with watching over us. As time passed, he became a part of the family, a man my daughter can rely on. A man who has never let me down, and whose intensity makes me weak in the knees. But that man is part of the same club that got Mouse killed, and there’s no way I can put myself or my daughter through that a second time.
Bosco
Taking care of Sarah and her daughter may have started out as a duty handed down to me by the president of my club, but now it’s as vital to me as breathing. Now I’ve become attached. I’ve learned how kind, brave, and sexy Sarah is. I was even there when she gave birth to the little girl that captured my heart the moment she took her first breath.
My feelings for her have turned from friendship to an all-consuming passion that threatens to burn me from the inside out, but I know she’s not ready. So, I wait. I wait while she takes the time she needs and stand by while she grieves. But when the world as we know it is rocked on its foundation, I can’t wait any longer. I need to prove to her that it’s okay to move on, that we need each other. That I will do whatever it takes to make her happy.

Sarah grins back and I can’t stop myself from looking down any longer. Since the second she opened that door, I’ve been fighting the urge to check her out in that tiny silk robe. It falls just below her ass, and if the hair in the towel thing is anything to go by, I know she’s buck assed naked under there.

I drag my eyes away from her slender legs and freeze. The front of the robe is gaping open and the swell of her breasts are right there, in front of me, begging me to touch. “Babe,” I say softly. “I’m gonna need ya to go put some clothes on.”

Sarah’s eyes go round and her cheeks flame as she gasps and looks down at what she’s displaying. “Oh, God.” Her hands come up and she grasps the material together. As she rushes by me, I reach out and take her arm, stopping her as she passes.

Every ounce of oxygen leaves my lungs as her eyes come up to meet mine from beneath her long dark lashes. My gaze drops to her parted lips, and the urge to lean down and press my mouth against hers almost consumes me.

Slowly, I lower my head, her warm breath mingling with my own. I can’t breathe. 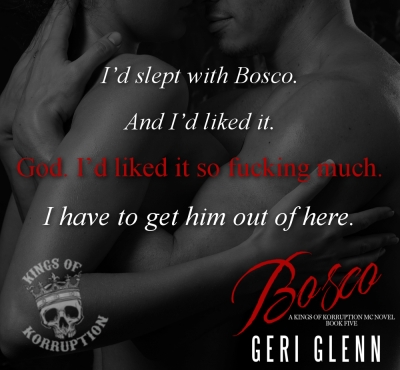 I absolutely love this series so I couldn’t wait to get my hands on this, it doesn’t disappoint. As with the previous books I was hooked straight away and read this book in one sitting, it really was an emotional read from the first page, though the author warns the reader that tissues will be needed, she wasn’t wrong!! The story follows Bosco and Sarah, Sarah is struggling being a single mam after the death of her partner, Mouse. Bosco helps as much as he can, though Sarah still blames the club for losing Mouse and fights Bosco constantly not wanting his or the clubs help. Soon Sarah has no choice but too accept their help and she also discovers what being part of an MC family is all about. Bosco loves Sarah and treats Millie as if she was his, he has always hid his feelings for Sarah but when things take a drastic turn, Bosco finally puts his heart on the line and goes after what he wants.

This book had a different feel to it from the previous books, this book concentrated on the family side of the MC life rather than the parties and the dodgy dealings, there wasn’t as much angst but it was a wonderful addition to the series. The author does an amazing job writing about such a sensitive subject, it really pulls on your heart strings. I’m sad that this series is over, but excited for the new series after reading the teaser at the end of this book.  5 Stars! 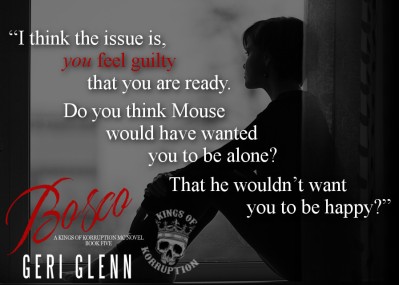 Geri Glenn is the international best-selling author of Kings Of Korruption MC Series.
Geri and her family just recently bought their dream home in her hometown of Brockville, Ontario, Canada. She is a military wife, the mother of two gorgeous, but slightly crazy little girls, and is a full time writer of the ultimate alpha male. 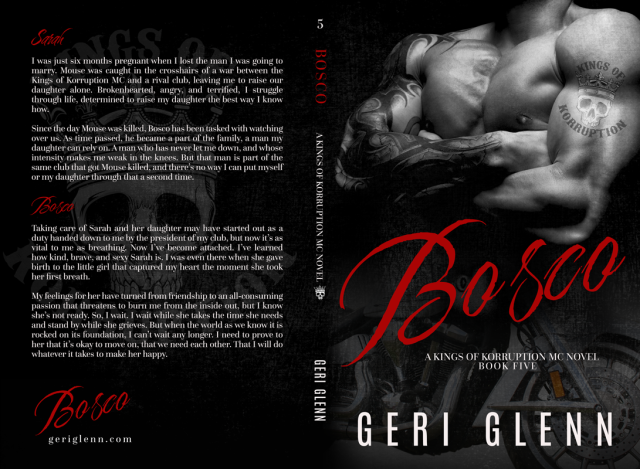