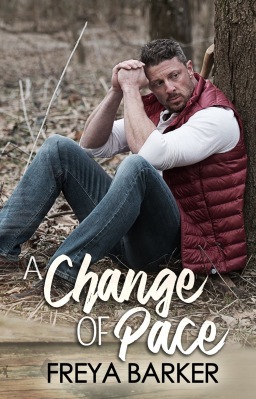 Once a man who lived by the letter of the law.
Newt Tobias will do anything for his little girl. Even take early retirement, sell his city home, and move to cottage country, hoping that the simpler life will provide a better balance for his troubled teenage daughter.
Yet, not long after they’ve settled, he finds himself toe-to-toe with a stubborn, fiery tempered woman with pretty brown eyes.
Once a recluse preferring to live alone.
Working with troubled adolescents, Frederique Marchand doesn’t suffer fools and won’t put up with bullies. Especially handsome strangers like Newt who think they can run roughshod over her. She loves her work, but on her own time she much prefers the company of her menagerie of animals.

But with the welfare of a teenager at stake, she must put aside rocky first impressions and work with a man who needs her as much as she’ll come to need him.

This is one of those books I wish I had more than 5 stars to give. I had to talk myself into putting it down so that I didn’t finish it too quick!

Newt is your classic macho man. Retired from the Ottawa Police Force, he’s learning to juggle raising his daughter after her mother passed from cancer. Millie and Newt pack their lives up for a change of pace from big city to the all northern community around Parry Sound.
With their big move, Newt meets Freddy. Frederique, or Freddy as everyone knows her, has had her fair share of hard times in life but now helps the youth with Boulder the support dog by her side and a farm full of animals. She hasn’t had interest in creating a love life in years, even if the new comer is something delicious.
Newt and Freddy come together on a slow burning journey to finding out just how perfect they are for each other. Their love and strength together can help not only themselves but all those around them. I love this series for its honest view of how life in the small communities can be. Newt and Freddy develop not only their relationship but that of a community coming together when one of their own needs it. This is not only a story of a love growing but of how that love can grow an entire family around them.
This is a story you won’t want to miss, let Freddy and Newt show you just how far love can take you. 5 stars!
Review by Christine:

“How was school?”
“Fine.” It’s the same answer Millie gave me yesterday and it doesn’t tell me anything. I read somewhere once that when a woman says ‘fine,’ it means she’s everything but.
“Anything exciting?” I try again, which earns me an eye-roll, and I turn my eyes back to the road.
“Actually,” she suddenly says, surprising me. “I met a dog today.”
“At school?” I’m confused; I didn’t know they let dogs in the school.
“Yeah. Dad, can we get a dog?”
“Wait. Is that even allowed? Bringing a dog into school?”
“I guess so. He’s some kind of service dog. But, Dad, can we have a dog?”
“What—like a Seeing Eye dog?”
“No, he belonged to a therapist visiting the school. So can we?”
“You saw a therapist?”
“It was just some kind of welcome thing they do with new kids.”
“That’s pretty neat.”
“Whatever, it wasn’t a big deal. Can we pick up a donut at Tim Hortons?” she asks, changing tracks at lightning speed. We’re coming up to Nobel and Timmies is just down the road. “I just really liked the dog. So?”
“Sure, we can.”
The screaming that follows almost has me running the damn Jeep off the road.
“Yes! Thanks so much, Dad,” she says with more enthusiasm than I’ve heard her express in the past four years. “Can we get one this weekend?”
Now I’m confused. Does she not want me to stop now?
“You want your donut this weekend?”
“Donut I want now.” She turns to me with big wide innocent eyes. “But we can shop for the dog this weekend?”
Wait. What? 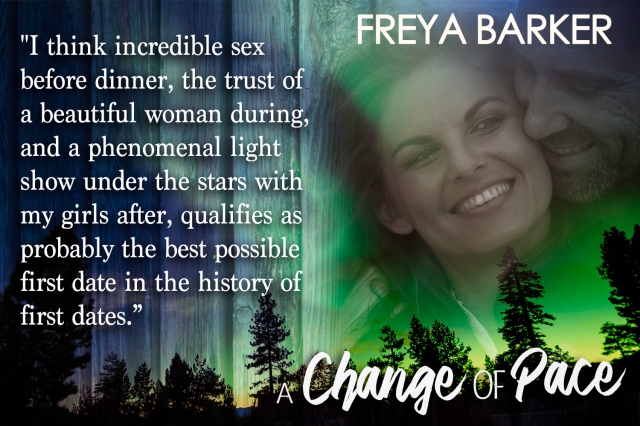 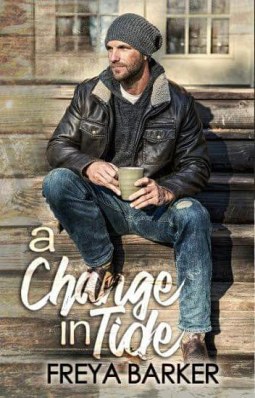 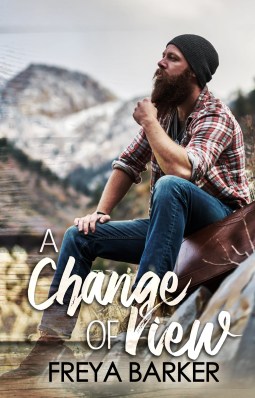 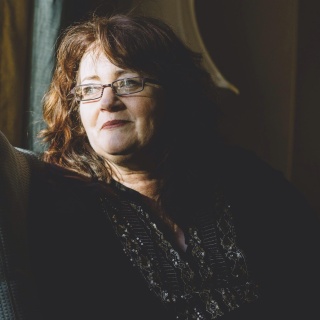 Freya Barker inspires with her stories about ‘real’ people, perhaps less than perfect, each struggling to find their own slice of happy. She is the author of the Cedar Tree Series and the Portland, ME, novels.
Freya is the recipient of the RomCon “Reader’s Choice” Award for best first book, “Slim To None,” and is a finalist for the 2016 Kindle Book Awards for “From Dust”. She currently has two complete series and three anthologies published, and is working on two new series; La Plata County FBI—ROCK POINT, and Northern Lights. She continues to spin story after story with an endless supply of bruised and dented characters, vying for attention! 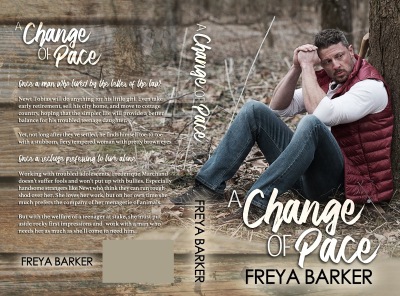 2 thoughts on “A Change of Pace by Freya Barker”