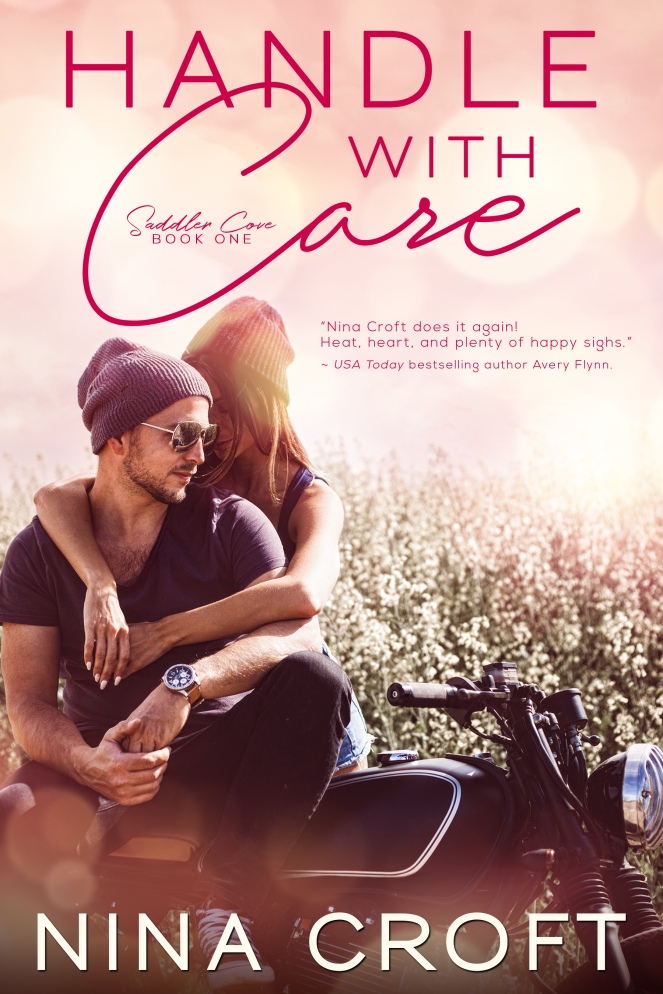 What if all you want is the one thing you can’t have?

First-grade teacher Emily Towson always does the right thing. The sensible thing. But in her dreams, she does bad, bad things with the town’s baddest boy: Tanner O’Connor. But when he sells her grandmother a Harley, fantasy is about to meet a dose of reality.

And then he goes and calls her “sensible”…

Tanner can’t believe sweet Emily is standing in his shop. Yelling and waving her hands and looking so god damn sexy he’s having trouble focusing. He’d spent two hard years in prison, with only the thought of this “good girl” to keep him sane.

He really should send her away…

Before either one thinks though, they’re naked and making memories on his tool bench with apparently the oldest condom in history. Now Tanner’s managed to knock-up the town’s “good girl” and she’s going to lose her job over some stupid “morality clause” if he doesn’t step up.

But can this bad boy teach his good girl they’re perfect for each other in time?

This story should be made into a Lifetime movie, it’s that good. A definite must read!
5 stars absolutely!
Nina Croft is an amazing writer and I am happy to have read this romantic meddling family story that will make you laugh and cry. The characters oh my I can’t express how the main characters you will love them all except Jed Forrester. Small town small minds is what this story is about and you’ll enjoy each story told about Tanner and Emily and Mimi and Josh. There is so much thought put into this story that you’ll get every thing you desire. Nina did a fantastic job that at the end I seriously believe this should be a romantic Lifetime movie. It’s got some drama and attitude but it has the second chance feel and the characters are so deserving to be made into real life. It flowed so smoothly from story to story. You get know the main characters of this small town and the newcomer that just needs a chance to live again. I was hooked from the beginning because the start of the book is with Mimi (Emily’s grandmother) meddling because you hear it as she talks. It is a bumpy ride for the characters but they pull through and give you a great ending and so much love.

Just the way she said his name, sort of breathless, made him hard. He nodded.“Emily.”

“What are you doing here?” Her eyes narrowed.“Did you follow me?”

“You looked a little upset. I was just making sure no one else followed you.”

“You mean Ryan? He’s being a total pain in the…”

“Yes.” She pressed her finger to the spot between her brows.“I don’t know what’s wrong with me. I’m usually so…” She took a couple of deep breaths.“He was making me so angry.”

“I thought he was your boyfriend?”

“Not anymore. It’s over between me and Ryan. It was over before that night you and I…”

He decided to help her out.“Had hot, dirty sex on top of the workbench in my garage. Then up against the wall in my garage.”

She gritted her teeth but gave a quick nod.

“Why was it over with Mr. Perfect? Did he finish with you?” Maybe she’d needed some sort of affirmation of herself as a sexy woman. He wanted to beat Ryan for that, though he had ultimately benefited from it.

“None of your business.”

Her face took on a mutinous expression, lips pursed.“He said I was sensible and then he asked me to marry him.”

Tanner managed to choke back the laugh, but she must have seen it on his face.

He’d proposed? That made Tanner want to growl. But she had a point. It sounded as though Ryan had fucked up on the proposal. Tanner certainly wasn’t sorry. Ryan’s loss, his gain.“Let me get this straight. If he hadn’t called you sensible, you would have said yes?”

“Probably not. He told me he’d decided it was time to settle down, and I was a nice, sensible woman, and would make him a suitable wife. Or something like that. I sort of stopped listening at ‘sensible.’What sort of man starts a proposal by saying you’re sensible?”

“Yes. Exactly. I said I didn’t think we were suited and walked out. Then when I got home, Mimi told me she’d bought a bike from you, and then she more than hinted that I was sensible, too. So when you said it as well, I just…sort of blew.”

“Actually, you kissed me, then you stripped, then you threw yourself at me. I didn’t stand a chance.” He had an image of her standing naked in front of him, challenging him to do something, and almost groaned.

“I did not throw myself at you.”

He just stood there, one eyebrow raised.

She folded her arms across her chest.“Anyway.I thought you were pretending that never happened?”

“Believe me, I’m trying. But I keep getting these little flashbacks at the most inappropriate times. Like when I’m picking up a tool from my workbench and there you are, all soft and naked and panting for me.”

Why did he do this to himself? His dick was almost painfully hard.

She was staring at him wide-eyed, her pink lips slightly parted. She didn’t move. He cast a quick look around the street—it was empty—then he closed the space between them, lowered his head, and kissed her before she could even have an idea of his intentions. He half expected her to pull back and run away, but her lips softened, then parted under his, and he slipped his tongue inside, sliding it along the length of hers. He kissed her until they both ran out of air. He hadn’t thought kissing was such a big deal, but he could kiss Emily all night.

Growing up in the cold, wet, north of England, Nina Croft spent a lot of time huddled under the blankets dreaming of faraway sunnier places and ponies. When she discovered both could be found between the covers of a book, her life changed forever.

At the age of eighteen, in an attempt to turn dreams into reality, she headed south in search of the sun. She quickly picked up the perfect husband along the way and developed a taste for red wine and holidays in warm places.

Soon holidays weren’t enough, and together they volunteered to work in Africa where they both discovered a love of traveling and a dislike of 9-5 work. Afterward, they spent a number of years traveling (whenever possible) intermingled with working (whenever the money ran out.) Eventually, they stumbled upon a remote area in the mountains of southern Spain where they bought the small almond farm they now call home.

No electricity, no neighbors, no chocolate shops, but on the plus side, stunning scenery, a vineyard to make her own red wine, and far enough away from anywhere to satisfy Nina’s hermit tendencies. She shares the farm with her husband, and an ever-increasing number of animals, including Piggles, a three-legged Vietnamese pot-bellied pig.

Nina now spends her days riding her mare Gencianna under the blue Spanish skies—sunshine and ponies. She reckons this is proof that dreams really can come true if you want them enough.

She still travels, but usually only in her imagination, and can often be found lying under a fig tree, wine in hand, plotting stories of love in faraway places.

Nina believes love can come to anyone, anytime, anywhere and her books reflect this. 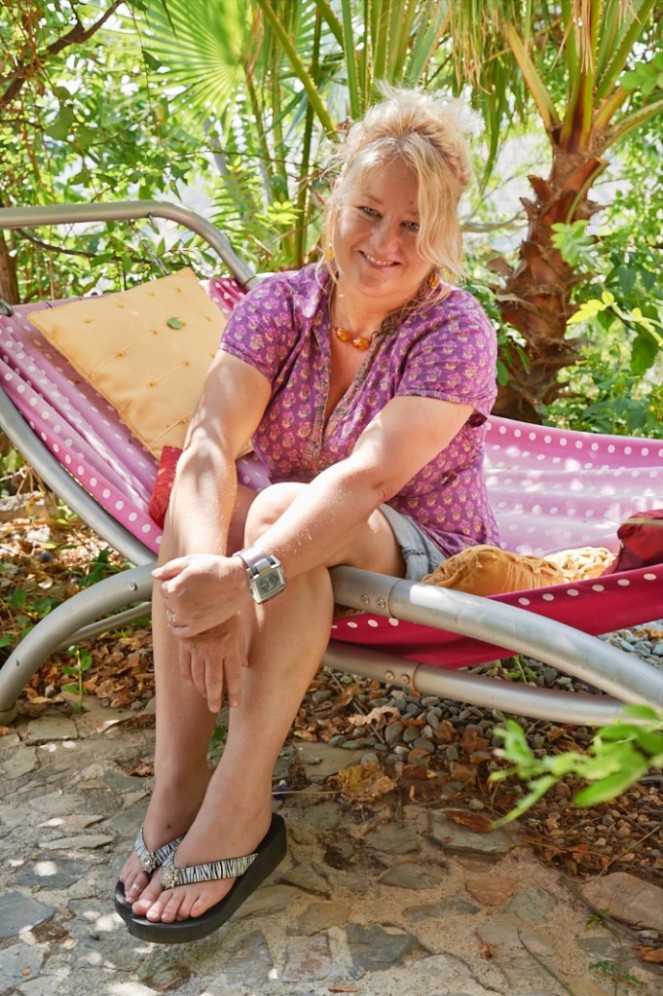