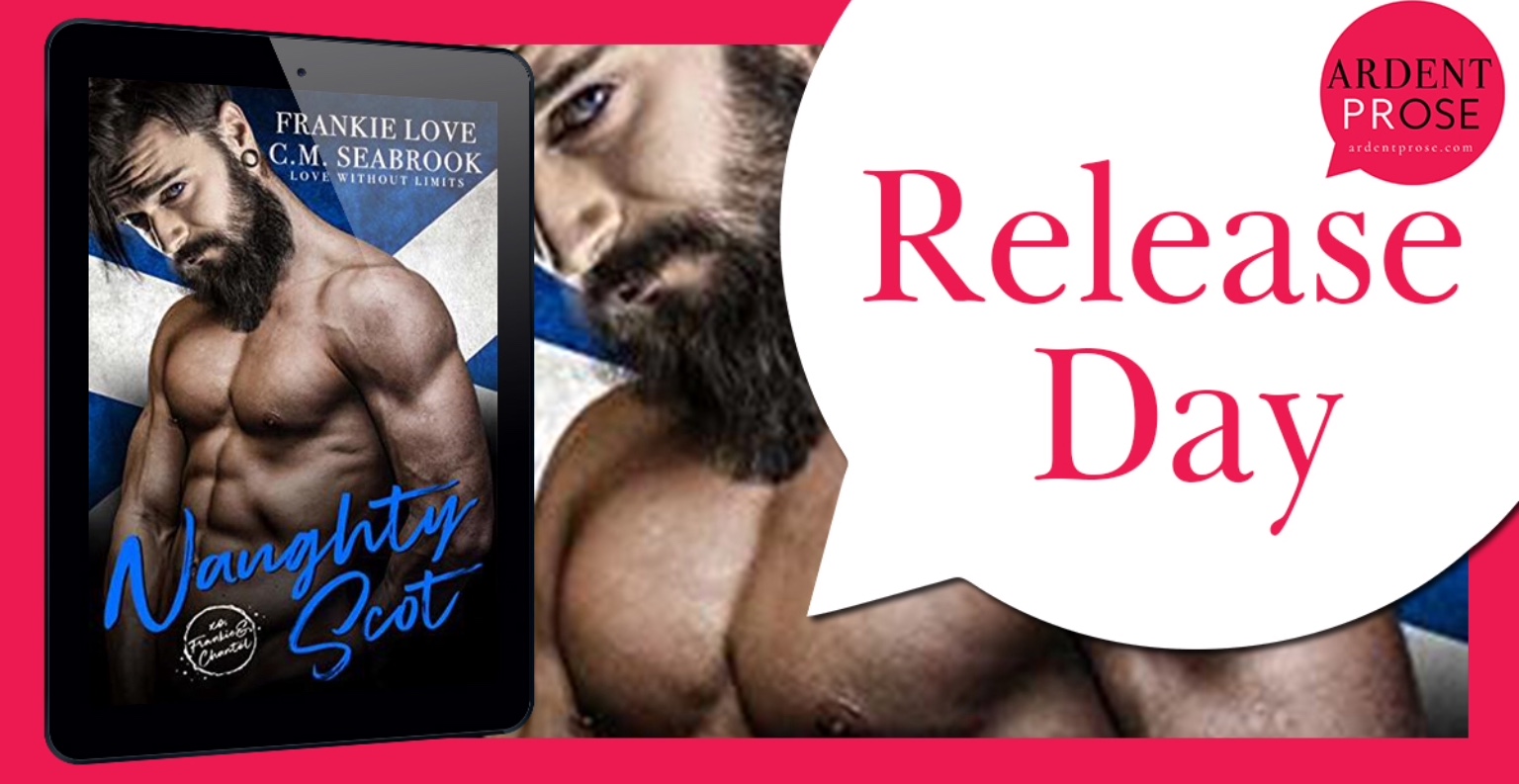 Review by Victoria:
If you love a man in a kilt with a heavy accent and no idea what Starbucks is, Keir is your man. He’s raised sheep on his family land all his life. It’s done him well, and he’s never wanted for more. Until one day, a woman shows up who changes his world.
Elsie just wants to get a job, and a summer in Scotland sounds like a great place to go. Even if her first few days get off to a muddy start, she’s determined to make it good.
This was a quick, dirty read. CM and Frankie paint a beautiful scene in the Highlands, where beauty and love seem to mix. Keir will make you wish for your Highlander, and Elsie wont be missing her macchiato for long! Life has a funny way of bringing two people together in some delicious ways. Definite HEA with the steamy to seal it! 4 Stars 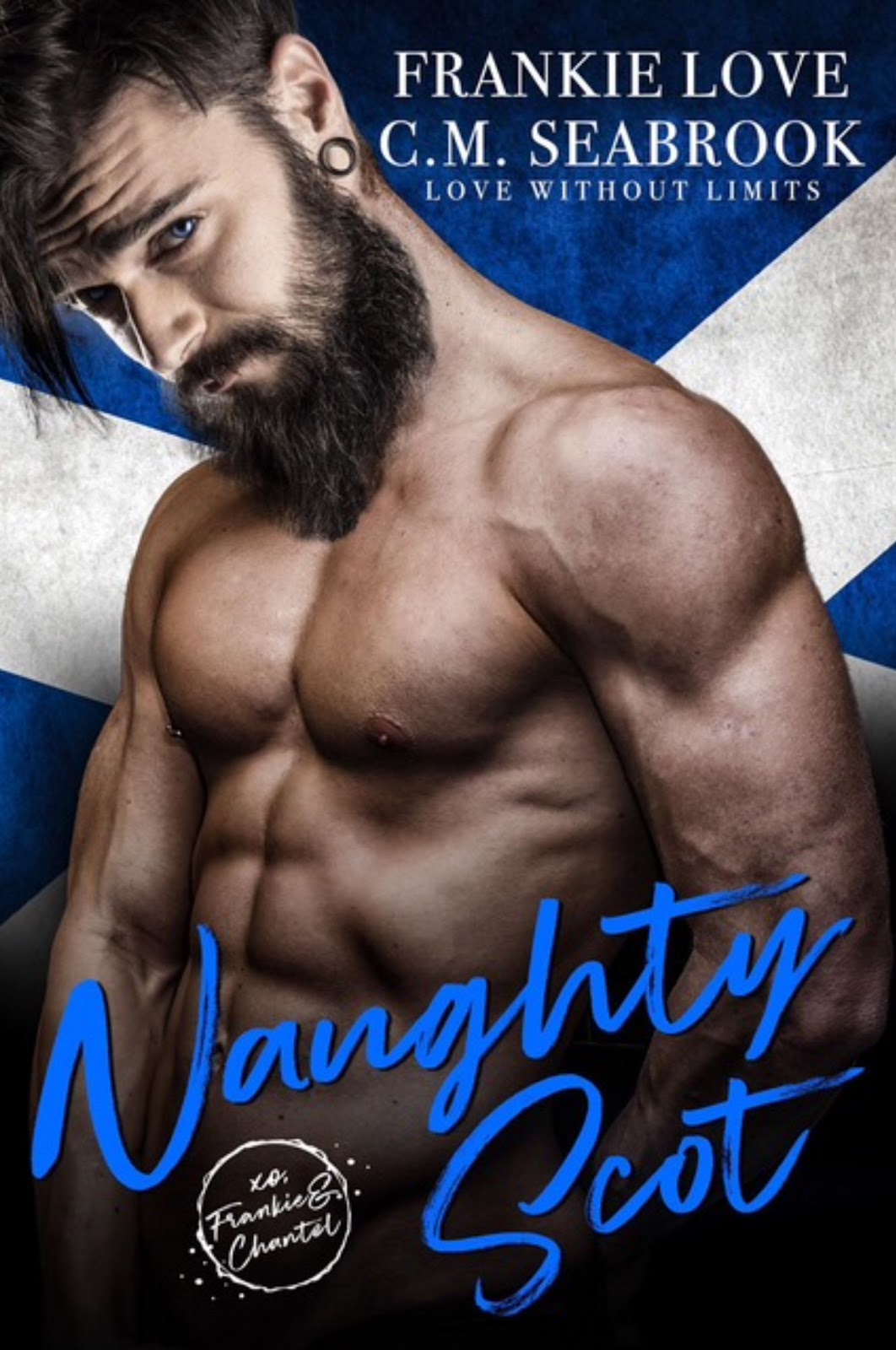 My life in the highlands is simple – and that’s how I like it.

But when a wee bairn is dropped off on my doorstep, things get complicated.

My sister’s baby needs looking after, but I have my fields and sheep that keep me busy.

When an American nanny moves in, it seems my problems are solved.

Except Elsie’s making my life more tangled than the baby is.

She’s everything I’m not and exactly what I need.

And I won’t be happy unless she’s holding this Highlander’s sword.

They say first comes love, then comes marriage – but we’re starting off with a baby carriage.

Kier is one naughty scot… with a VERY BIG secret.

We aren’t time traveling with this Scottish romance – but we do have a thing for highland virgins!

Take a look under that kilt and see for yourself!

“I’m comin’,” I grumble, tossing on a shirt and a pair of breeks when the knocking on my cabin door continues.

I open the front door, sure it’s Gregor here to ask which field I want the sheep to graze this morn’. But it’s not the lad I’m expecting. An older woman, carrying a bundle in her arms that I’m supposin’ is a bairn, peers at me over wired rimmed glasses. “

Can I help you?” I ask, running a hand over my beard.

We don’t get many visitors in these parts. Other than the men who work for me, the small town just east of here, and few smaller crofts that dot the hills surrounding my own, it’s just grass, sheep, and hills for miles around.

“Are you Kier MacKinnon?” the woman asks, peering around me, trying to look into the cabin.

“Who’s askin’?” A sense of foreboding sits heavy on my chest, and I get the impression the woman is scrutinizing me. I rake my fingers back through my hair trying to look more presentable, but it’s not much use.

“Is this a charity thing? Are you raising money?”

Martha shakes her head, resting the babe on her shoulder, and patting it’s back. “No, quite the opposite. Can I come in?”

Frowning, I consider the question. An old biddy asking to come into my cottage with a wee one is the last thing I was expecting. But I’m not going to deny this woman what she wants.

“Did you have some car trouble, or get lost?” I ask, prying her for information as I lead her into the small living area. “It’s easy to lose your way in the highlands—”

I frown at her and nod, glancing back down at the bairn. If I weren’t a hundred percent certain that the wee one wasn’t mine, I’d probably be pacing the floor right now wondering about the news she’s here to deliver.

“Tea?” I ask, attempting manners. It’s been a long arse while since I’ve needed to use them.

“No, that’s fine,” she says, her gaze scrutinizing every detail of the house. “This is your home, then?”

“After my parents passed, I never moved into the main house, just kept back here. Fine for a bloke like me.”

“Right, well, the thing is Kier, I have some rather untimely news.” She frowns, her lips forming a thin line. “You may want to sit for it.”

“Just tell me, what’s this all about?”

“I gather you never received my messages?”

“Gregor is my errand boy, but he rarely remembers to fetch the mail. Was it important?”

“Quite. It’s about your sister, Mollie.”

There’s that unsettling feeling again, but now it’s in the pit of my stomach. “Haven’t seen her for two years. She left home the day she turned eighteen and never came back. Have you seen her then?”

“What do you mean, gone? She hasn’t been around in ages.” I try to keep the bitterness from my voice, but it just about broke my parents’ hearts when she left without a backward glance. Didn’t even have the decency to come home for her own parents’ funeral.

Martha pats the seat cushion beside her. “Why don’t you have a seat.”

Your sister has died, Kier, and this wee one is her son.”

I’d do it all over again, in a heartbeat. Aye, of course I would. The bairn is my family, and so of course I’ll do what I must to keep him close.

But I never expected to be twenty-four-years-old with a wee one to look after. Before this, I never looked after a soul besides myself. I keep a low profile, my head down. I do the work of ten men on my farm and I go to bed exhausted every night. I don’t have time to worry about women, about lassies looking for a fun time.

It’s never been my style. But now I am going to have a woman living in my house.

“You want the bed here, in this corner?” Gregor asks from the spare bedroom across the hall from the nursery.

The social worker had insisted I couldn’t keep a baby in a cottage without running water, so I’d moved back into the main house where Mollie and I grew up. It’s so much bigger than the cottage, but the place feels…wrong. Sheets still cover furniture, rooms are bare after I’d had to sell most anything of value last fall to pay off my father’s incurred debt. A debt he’d managed to keep hidden until I’d taken over the books after he passed.

I’ve managed to get the accounts in order, even hired a couple more men to tend to the sheep, but I should be out on the moor, not here consoling a crying bairn.

As if on cue, Brodie starts wailing-his favorite thing to do, morning, noon, and night.

“When does the nanny arrive?” Gregor asks, wiping his hands on his kilt once he’s finished setting up the bed. For a young bloke, he’s a hard worker. And getting the main house put in working order is a task I need help with, especially since I have a newborn strapped to my chest in a sling.

“Hopefully soon,” I tell him, placing Brodie on my shoulder and rocking him.

“I think he’s hungry,” Gregor says. “You want to take care of him?”

Gregor puts his hands up and chuckles. “No. I’m not good with wee ones.”

I grunt and leave Gregor to continue straightening the room and go to the kitchen to fetch Brodie a bottle.

The house is full of ghosts, broken promises, and memories, and I miss the small, simple confines of my cottage. But the main house has heat, and I realize that this wee boy needs that consistently. I may be a mountain of a man, but I’m not completely daft.

“It’s okay, little one,” I say, patting his back and placing the bottle to his mouth. He latches on straight away and the moment the squawking stops my shoulders fall.

I’ve been a ball of tension since Brodie came into my life. After Martha broke the news to me, about my sister, I was a mess. The idea of her gone, forever, shook me up. She was so young, and while the girl always had a knack for getting into trouble, she was family. And I’d never wished her anything but goodwill. But complications in childbirth means she’s now watching over her boy from above, not cradling him in her arms.

So, I did what needed to be done and got this house in order for little Brodie. I fetched a crib, nappies, and bottles, but I’m in utterly over my head. One of the first things I did was call Tansy. She was my mum’s best friend, though she’s now moved to America. She told me I needed a nanny, straightaway. I took down the number of a service she’d heard about and made the call, but now, nearly four weeks have passed and I’m still waiting.

I was told the nanny would be here two days ago, but there hasn’t been any sighting of her. Maybe the girl changed her mind. I’ll have to make another call to the agency if she doesn’t show up by tomorrow.

The bottle is finished, which means Brodie is back to fussing. Probably needs a nappy change, a burp. I never knew how much care a wee one needs.

I can see the sheep through the window, needing to be put in the lower field. I haven’t checked on my farm in weeks and I know the crew are wondering where I’ve gotten off to.

There’s a knock on the door, and I say a silent prayer that it’s the woman I’ve been waiting on.

A screaming bairn in my arms, I walk toward the front of the main house and wince when I catch my reflection in the full-length mirror. Brodie spit up over my shirt earlier and I’d taken it off, so I’m currently bare-chested. But at least I’m wearing breeks.

I think about running upstairs and putting on a shirt, but the knocking grows more insistent.

When I open the front door, it takes me a moment to realize that it’s a woman who stands there, because she’s covered head to toe in mud and dirt, and god only knows what else considering the smell. Tangles of wild brown curls are plastered against her face, and big hazel eyes blink up at me, widening when she takes in my appearance.

But despite her obvious attempt to hold back tears, she stretches out a hand, and says, “I’m Elsie Stewart. Your new nanny.”