Sexual addiction, exhibitionism, and voyeurism…
Three best friends, three different wickedly delicious sexual needs.
Lose your inhibitions and get ready for a wildly sexy ride…
Always Wanting
Abigail Summers is addicted to sex. Not by choice, but by her body’s demands. If she doesn’t have sex at least once a day, her body is wracked with unbearable withdraws. It’s not a lifestyle she chose for herself. When Colt Maverick walks into her life with his beautiful blue eyes, sexy as sin body, and possessive nature, she craves something more. Will he be enough to satisfy her insatiable desires?
Bare Yourself
Meet Teagan Zanders; fun-loving, sexy, and an exhibitionist. He enjoys having someone watch while he and his partners are giving and receiving pleasure. To him, it’s the ultimate high and extremely arousing. He’s never been tempted to settle down with one woman. That is, until he meets Willow Bennett. Now all he can think about is showing her just how good it could be if she lost her inhibitions and let him put her on display.
Watching Mine
Nathan is a watcher. There’s nothing more erotic than seeing desire on people’s faces as they writhe in pleasure or when their bodies tighten as they balance on the edge of ecstasy. He’s a loner, preferring to stay on the outside looking in. But from the first time he watched the woman in the apartment across from his, he knew she was different. She teases him with her soft touches and silent moans. Once he has her, there’s no way he’ll ever go back to simply watching.

Review by Paula:
I love this series! Abby is addicted to sex well not on purpose but if she doesn’t have sex she’s in so much pain she can’t function. Abby meets Colt and her world maybe can change or is it just like every other random partner?  Teagan likes people to watch him have sex. Teagan meets Willow and can he show her how sexy it is to be watched? Teagan is one funny sexy guy!  Last but not least we have Nathan. Nathan has been watching his neighbor for years it turns him on. Then actually meeting Emberleigh can Nathan tell her his secret?  My favorite story of all 3 I would have to say is Nathan the quite sexy guy that would do anything for his friends and loves hard. All 3 have there addictions and each one is unique and sexy at the same time but I’m glad the each found their one! 5/5 stars 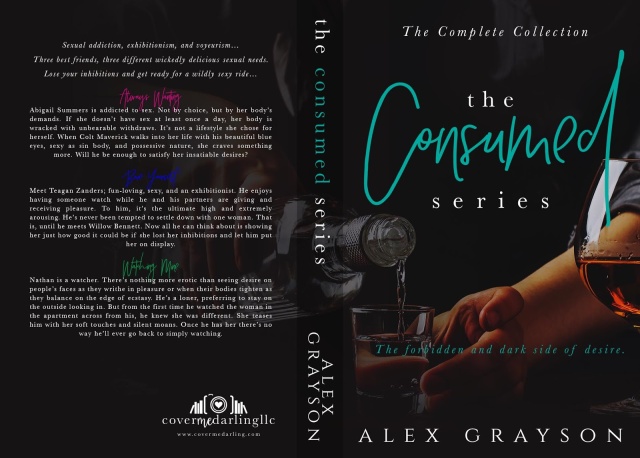